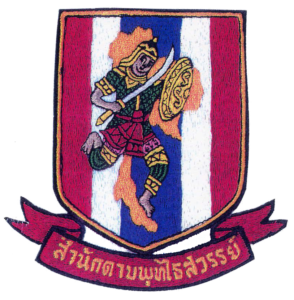 Krabi-Krabong is a weapon-based martial art originated in Siam today known as Thailand. It is closely related to other fighting styles from its neighbors from Southeast Asia, Burma, Malaysia, Cambodia, Laos and Vietnam, all whom have their own styles of weaponry and combat arts as well. It was taught at the Inosanto Academy for quite some time and still today from time to time.

With the popularity of Muay Thai and the sport aspect of it, many ancient arts were declining and on the brisk of extinction, such was a similar case in France with Savate and Chausson who nearly disappeared with the advent of the modern art of Boxe Française and the competition that goes with it. Today the art is reviving thanks to the work of some serious practitioners and it can be seen in many movies such as ‘The Man with the Golden Gun’ where I saw a short but nice demonstration of the efficiency of the Krabi-Krabong to more recently ‘Kingdom of War’ and many other quality period Thai movies.

In ancient Siam, Krabi-Krabong was the art taught to the Siamese warriors whose task was to protect the King or the kingdom during violent battles and their survival depended on their skills and the mastering of the art.

The name Krabi-Krabong literally means “sword and staff”. The Krabi (Daab) is a curved and pointed, usually single edge sword with a long handle. The Krabong is a staff or a pole. There is another kind of staff that has a blade in the extremity the length of a sword and it’s called ‘ngao’. This weapon looks very similar to the ‘naginata’ and could possibly be a Japanese influence when some of them settled in Siam between the 17th and 18th centuries (see Muay Thai Warrior).

If the weapons panoply of Krabi-Krabong is far to be as vast as the one who found in the Filipino martial arts, the practitioners of Krabi have also the shield, therefore the sword and shield, the stick, the stick and shield and a single or double forearm protection (Mai Sok) that can be use for striking as well, a weapon that remind most martial artists of the Japanese ‘tonfa’.

The art of Krabi-Krabong with its simple yet effective basic strikes, combine with the use of the Muay-Thai kicks, when opportunity arise, make it a very practical system of combat and a quick way to learn a system that can be use efficiently for battle.