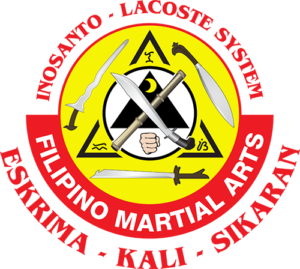 “...There are over 7000 islands in the Philippines and countless dialects, and there exist well over 100 systems of Kali, that were taught under several names, such as ‘Arnis’ ‘Arnis de Mano’ ‘Silat’ ‘Kuntao’ ‘Eskrima’ ‘Kali’ ‘Pagkalikali’ and many more. We use the term ‘Kali’ to name the mother art, since the word "Kali" is of pre-hispanic origin. The other names 'Arnis' 'Arnis de Mano' are purely of European origin and were born in the Philippines during the Spanish colonization. "Eskrima" or "Escrima" obviously comes from the French word ‘Escrime’ or Spanish word 'Esgrima' meaning ‘Fencing’, while the word "Arnis" comes from the Spanish word ‘Arnes de Mano’ which means ‘Armor or Harness of the Hand’. But ‘Kali’ or ‘Kali Kali’ is a much earlier name that pre-dates the arrival of the Spanish conquistadores and settlers. Some see the origin of the name Kali, the name of a much used blades by the Moro warriors of Southern Philippines. According to Guro Dan Inosanto, Kali is composed of the Cebuano words "kamot", meaning hand, and "lihok", meaning motion.

Often but not always, in the martial arts of the Bushido, the study of weaponry is taught to the practitioners who have achieved a certain level of proficiency with empty hands. In the Filipino martial arts, it is completely the opposite! Although there are other reasons, the main one lies in the fact that even today in the Philippines and much of Southeast Asia, both men and women are often armed with blades, which are often hidden in their clothing attire. It is therefore totally illogical to use bare hands or kicks (especially bare foot) against someone armed with a sword or a knife and who furthermore, knows how to use it. So in our system, the student learns immediately the use of the stick(s) or dagger(s) which can be transpose into a sword and a knife or a long and short stick, in the process, he or she will learn unwittingly how to defend against those weapons with bare hands. The logic is implacable! Indeed, already in medieval times, the soldiers would learn the handling of the sword and dagger, or any weapon of his choice before learning the self-defense with bare hands and this in order to be more effective in the shortest amount of time.

The Filipino martial arts as we teach them are a synthesis of over thirty five different methods. Guro Dan Inosanto had more than 35 instructors who were most of them, great masters of their styles, vestiges of a time when their survival depended on their skills and their knowledge of the art. Most of them are now deceased, and their arts have passed into the hands of Inosanto, making him the world leader in the teaching of some of these methods. One of these masters, was Juanito (John) Lacoste whose system of FMA encompass all the others by the extend of its curriculum. Most Filipinos martial arts systems are rather incomplete; they have 2 or 3 sometimes 5 or 7 categories of instructions. Because Johnny Lacoste studied and synthesized many of them from all over the Philippines, he alone possessed all 12 categories. His combat system was so complete, graceful and terribly effective, that Dan Inosanto rightly regarded Lacoste as the Bruce Lee of the Filipino martial arts.

The Filipino martial arts encompass the biggest spectrum of weapons of all kinds of any martial arts known to man. Kali feature also an extremely complex and sophisticated system of empty hand combat that makes it one of the most fearful system of combat in the world today. The students through our logical progression learn to deal against any situation or any weapon, whether he or she is armed or empty handed by using body angling and zoning, the mastering of distances, fluidity and spontaneity. At some points the students will discover and learn how to be creative.

Kali is a combat proven martial art that spans many generations. From the time before the Spanish invasion of the Philippines, to only a few decades ago, Kali was a closely guarded secret that was passed on from teacher to student or/but not necessarily from father to son. Only those students with a pure heart and deemed loyal were taught the art, and it was originally never taught to non-Filipinos.

Today the art is practiced by tens of thousands around the world and the perpetuation of this treasured part of the Filipino heritage continues.”