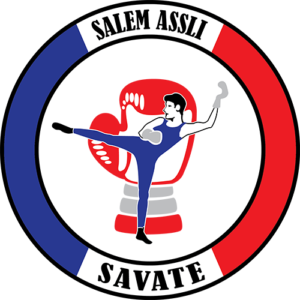 Savate is a unique street fighting system using hands, feet, elbows, knees, and head butts for striking, as well as throws and locks. Chausson, a more mild form of foot fighting, is for the most part, the ancestor of the sport of Boxe Française (French boxing).

While we know precisely the date of creation of Boxe Française, it is not the same when it comes to Savate, whose obscure origins are lost in the mists of time. We traditionally admit that Savate was elaborated by hoodlums, marginals and French convicts, who during the XIX century had to find some way to defend themselves when they weren’t busy attacking the bourgeois and the authorities*. This explanation is rather simple even if part of it is true, it does not really explain the origins of Savate, and how it came to elaborate into a sophisticated art. The fact is that Savate is likely to be as old as the Gauls themselves. However like boxing find its roots in ‘pugilat’, recent work traces savate roots in ‘pankration’ and even further.

If Boxe Française is the offspring of Savate and Chausson with outstanding attributes such as footwork, mastering of distances, precision, awesome combinations, developed through decades of ring experience, it remains nevertheless a sport with strict rules and limitations. On the other hand, Savate was preserved and developed by the master of arms to be use in duel, or to be able to still fight in the advent that you would lose your weapon(s), therefore there were no rules whatsoever. When it comes to survival, in Savate everything goes. Before a duel, depending on the degree of offense, the phrase was pronounced: ‘Vas-t’on de tout?’ – French for, ‘Does everything goes?’ In Portuguese: “Vale tudo”. According to the seriousness of the offense, everything goes, or only hands and feet were put in use for combat at the first blood if it was a minor offense. This explains the variety of styles and techniques that varied from one teacher to another. The emphasis of the art could change, mainly due to the destructive nature of many savate techniques (many of them are strictly forbidden in MMA fights but are found as the foundation of JKD).  In savate there is no need to be concern about having an awesome footwork, having a perfect mastering of distances, and so on. All that matter is to win the fight by all means necessary. The philosophy of Savate is quite similar to the one found in Jeet Kune Do, furthermore Savate is absolutely unique to each individual.

While the hand techniques of Savate seem more primitive than in English Boxing, they are nevertheless extremely efficient when used without the gloves in a great variety of fashion. They are used for percussive blows, to slap or to pock the opponent’s eyes, they are also use to grab the opponent’s punches and kicks, and here comes ‘La Lutte Parisienne’ or Parisian Fighting.

La Savate combined with La Lutte Parisienne was a very complete art for its time, and terribly efficient even today. Many teachers and practitioners throughout Europe praised its deadly efficiency, in fact so many novelists from the late 1900’s to the early 20th centuries mentioned it, or provided their main character with the knowledge of Savate and La Lutte Parisienne, such as Eugène Sue in his book “The Mysteries of Paris”.

Today while most people think that Asia was the cradle of martial arts and that the techniques used in Judo and Jiu-Jitsu are Japan exclusive creations, they should know that 4 or 5 centuries before the birth of Jiu-Jitsu and Judo, the Europeans already codified, wrote and published books on the subject of fighting with or without weapons.

*The 'Apaches' (name given to Parisian gang members in the late XIX century) were for the most not only expert in street fighting, but also expert in knife fighting, and many illegal weapons. They gave trouble to the authorities for nearly 3 decades to finally found their demise in the trenches of the First World War.